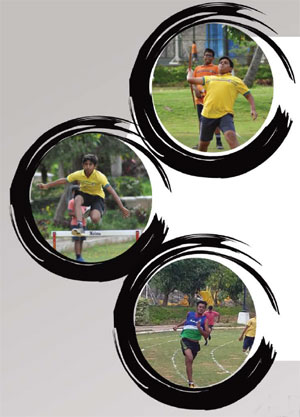 2016-17’s much awaited event, the inter house athletics competition took place from the 1st - 5th of August, 2016. The five days witnessed a lot of enthusiasm, zeal and cut-throat competition. All athletes taking part had the determination to win, both for themselves as well as for their house.

With almost all standard events of athletics that exist in the Olympics being present for this inter house for the four age groups, the event was certainly the biggest inter house sports event of the year. There were a lot of events where students broke the previous records and created a notch for themselves in the Athletics record list.

The most intense event was the 'Tug of war' in which 30 boys from each house attempted to dominate their opponents with a display of testosterone, might and co-ordination. Vivasvan House muscled their way into first position closely followed by Aditya House and then Bhaskar House. The Athletics Meet came to an end with the completion of the Cross Country event held on the 6th of August for all the students. With the cumulative of all points acquired by the houses put together, the overall Athletics trophy was bagged by Aditya House followed by Vivasvan House and Bhaskar House.