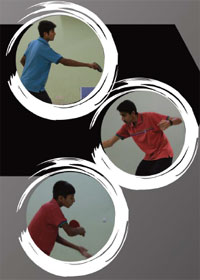 The half yearly ended on the 26th September, 2016 and the much awaited inter house table tennis competition commenced. All the students were gathered around the table tennis tables cheering for their houses. There were very tense and intense matches, along with some one-sided matches. There was no chance of anyone giving up as they were playing with all their might. Inter house table tennis was a very exciting event with remarkable performances and skills showed by the participants. The overall champion was Vivasvan House followed by Aditya House. This event was filled with ecstasy and joy.